I have always loved working with pearls—especially baroque pearls. While others may daydream looking at clouds, I find it entertaining and inspiring to see what is ‘hiding’ in a pearl. Sometimes this is obvious; other times, finding the message in a pearl requires close inspection and a great deal of imagination.

While examining the plethora of offerings at the United States Pearl’s booth at the Tucson Gem Fair, a large freshwater pearl caught my eye. I can’t explain it, but I immediately saw an owl in the pearl. To my delight, when I examined it closely and turned it around, I saw the other side (with some imagination) could be a cat.

At 65 years old, I attended elementary school in the days when we were required to memorize poetry—and, one of my favourite pieces, penned by Victorian poet Edward Lear, was The Owl and the Pussy-cat! I purchased the pearl on the spot, realizing it could perfectly illustrate the poem.

Indeed, some designs seem to spring forth fully ‘formed’ when the inspiration hits, and this pearl did exactly that. I could visualize a ‘pea-green’ boat (green gold, maybe with gemstone accents), floating on an ocean with the owl and pussy-cat pearl aboard. Of course, staying true to the poem, I’d have to incorporate a gold five-pound note, enclosing honeycomb and money. As the design progressed and more elements were added, I realized the project would require more time, energy, and imagination than originally expected.

When I returned home, the pearl sat in my safe for a year or so before I got to work on the design. I thought I would make it a sculptural piece and enter it in the ‘Object of Art’ category for the American Gem Trade Association (AGTA) Spectrum Awards. To that end, I decided to visit another Tucson gem show to find some of the other components I would need for the design.

First on my list was a base for the sculpture, as the pea-green boat would need to be afloat on a ‘sea.’ My initial idea was to incorporate a massive, aquamarine crystal specimen—preferably one with some of the natural surface extant. While spending several hours wandering around a mineral specimen-centric gem show along the Interstate 10 in Tucson, I came across a couple of aquamarines that were suitable, but the price was simply too much for this project.

You May Also Like  Gem collectors anonymous: Have gems, will sell

Determined, I switched my focus to larimar, which is about the most ‘ocean’-like stone one could hope for. However, the natural surface pieces somehow didn’t look right. While it was beautiful when polished, I was convinced I needed a more irregular surface and natural texture for this component of the design.

Low and behold, I came across a dealer with magnificent specimens of rough chrysocolla from Peru—eureka! I selected a beautiful variegated Caribbean-Mediterranean blue and green, complete with glittery calcite inclusions and a subtle surface texture to give the appearance of gentle ocean waves. The rough piece would require some trimming to convert it into a flat-based slab, but other than that it was perfect as found. Ultimately, I recruited the help of a local lapidary, who did a fine job cutting the slab.

My next tasks were achieved in several steps. First, I had to add gold and gemstone details to the pearl to reinforce the features of the owl and the pussy-cat. Initially, I didn’t want to add more than eyes for both, a beak for the owl, and whiskers for the cat, but, in the end, decided that to achieve full effect, I would need to include a tail for the cat and wings for the owl.

I purchased tiny, oval cat’s-eye chrysoberyl cabochons for the kitten’s eyes, but found they were a little too big. Further, after some research, I learned cats’ eyes are actually round and, in some conditions, feature a vertical ‘line’ in the centre. The ‘eye’ in the chrysoberyls ran the wrong direction; however, my lapidary colleague was able to trim the ovals down into matching 3-mm round stones. I carefully drilled holes into the pearl, then correctly oriented the eyes and glued them in place. Fine round platinum wire was fused and manipulated to create the animal’s whiskers (and the suggestion of her mouth), then pegged and glued into the pearl. Her tail was modelled in wax and designed to wrap around her body with slight visibility on the opposing (owl) wide of the pearl, representing affection for her mate.

I tackled the owl’s eyes next, testing out several options before finally settling on two 3-mm faceted, black spinel beads. I inserted 24-karat gold wire ‘pupils’ into the drill-hole of the beads, framing the spinel with a textured yellow gold surround. Like the cat, the owl’s eyes were set into holes and drilled into the pearl.

The owl’s beak was carved from 18-karat yellow gold, then pegged and glued it into place. For his wings, I found a pair of 3D computer-aided design (CAD) models, which I manipulated, milled in wax, and cast in 19-karat white gold. The pieces were then pegged onto the pearl, and articulated with pins to allow for slight movement. Like the cat’s tail, they’re slightly visible from the opposite side, giving the cat an embrace from the owl.

As the poem reads, the owl and the pussy-cat went to sea in a pea-green boat. I decided the craft would have the form of a pea pod, and adapted a CAD model of a pea by enlarging and changing the proportions until it was a suitable vessel for its passengers.

The baroque pearl had a small ‘extension’ on its lower end. I decided to remove this, which allowed me to insert a female bayonet fitting. Meanwhile, the male bayonet fitting was installed in the base of the boat, so the pearl could be removed from the boat if desired. (A future project of mine will be to create a piece of jewellery, most likely a neckpiece, into which the pearl could be fitted and worn.)

The peapod boat was prototyped in resin, then cast in 18-karat green gold. To keep the weight to a minimum, the walls were only about 1 mm thick.

The calyx on the ‘stem’ end of the pea pod was grown and cast separately, then attached after finishing. The gunnel edges of the boat were left slightly thicker, allowing for 1.1-mm round, brilliant-cut light green tsavorites to be pavé-set along both edges. This task was challenging, as green gold (an alloy of pure gold and pure silver) is butter-soft and, while pushing beads was easy, the craft needed to be fully supported on the inside to prevent distortion or collapse of the walls. 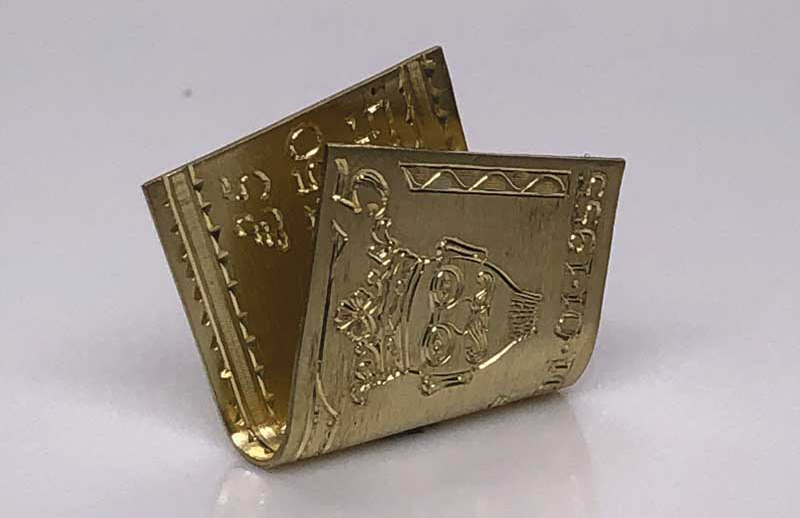 Following along with the poem, the design required ‘some honey, and plenty of money, wrapped up in a five-pound note.’ To achieve this aspect, I modelled a honeycomb using CAD, then milled it and cast the piece in 18-karat yellow gold. Small, natural fancy-coloured diamonds, the shade of honey, were set in a few of the comb’s cells, then tiny coin shapes were cut from white-gold sheet and engraved with small denominations of currency.

You May Also Like  Are you being cased? Know the signs and learn to record suspicious incidents

Next, a thin rectangular sheet of 18-karat yellow gold was crafted and passed along to Warren Smith, a talented, British Columbia-based hand-engraver, who engraved the piece to look like a banknote. As a little joke, I asked him to etch in a caricature of my face with crown atop my head on one side of the note.

For assembly, I folded the gold banknote around the honeycomb and coins, which were then welded into place. Finally, the neat little package was secured onto the bow of the boat.

All about that base

While the vessel, its passenger(s), and its cargo were being fabricated, I shifted my attention to the sculpture’s base.

The chrysocolla piece was approximately 170 by 110 mm and, with the boat a little less than 100 mm long, this left a lot of open water. Rather than reduce the size of the sea, I opted to add a bit more to the scene.

They sailed away, for a year and a day,

To the land where the bong-tree grows;

And there in a wood a Piggy-wig stood,

With a ring at the end of his nose…

Further to the tale, the owl purchases the ring from the pig and presents it to his bride, the pussy-cat, as her wedding ring (paid for with some of the money wrapped up in five-pound note).

With that direction in mind, I set off to create an island in the sea. I found a piece of stone (likely a form of porphyry) I had collected on one of my European vacations, which was dark green with pale inclusions and had a rough, textured surface. My lapidary sliced a piece off the top and this became the island.

Rather than a bong-tree, I opted instead to construct a palm tree on the island. I modelled the trunk in wax by hand before casting it in 18-karat rose gold. The palm fronds were hand-fabricated from thin sheets of 18-karat green gold and a goldsmith by the name of Jean van der Merwe fabricated a custom steel punch to add the veins of the leaves. The fronds, despite being quite thin and delicate, were welded together and fixed to the top of the trunk. The black and grey south sea keshi pearl coconuts were the suggestion of van der Merwe, and they were drilled and attached under the palm fronds.