Of course, no jeweller sets out to deliberately damage a client’s gem, but accidents do happen. If a client’s stone is heavily included or is cut with a thin girdle, sometimes discretion is the better part of valour, and the job should be refused. It’s better to decline the job if there are any concerns.

Sometimes it’s necessary to take the job anyway; perhaps business is less than brisk, and there are shop expenses to meet. It’s possible to add a premium to the price quoted, and try to cover some of the lost revenue. An ‘insurance’ fee can also be added. This charge reflects a percentage of the appraised value of the gem, and will help cover any potential problems during fabrication. Plus, it can be a form of self-insurance if the proceeds from these fees are kept in a separate bank account. By letting these funds accumulate, one would not be entirely out of pocket if there was ever an unfortunate occurrence.

If sentiment dictates the redesign, I will try to re-use a ring or earring in its original state. A current example is the ring show here. This is a work in progress so I will describe the process I chose to use. The ring  initially belonged to my client’s grandfather, then his mother, and eventually it passed down to him. It shows its wear and love, and my client has fond memories of the ring on both his
grandfather’s and mother’s hand.

The ring is only 10-karat gold, worn practically to nothing, and the crown of the garnet has been obliterated by wear.

Monetarily, the ring is virtually worthless, but in terms of sentiment, it has immense value. This naturally provoked a lengthy discussion of the pros and cons, the best path of action, and a way to balance sentiment, cost and practicality.

My suggestion was to remove the garnet, as the claws all need to be built up in any case. Since the crown is shallow and worn, I recommended simply polishing the top to create a buff-top stone. It could be re-faceted (at a far greater cost), but the resultant reduction in the diameter would leave a stone ruining the proportions of the ring. If the ring had been in better condition, another option would simply be selling the 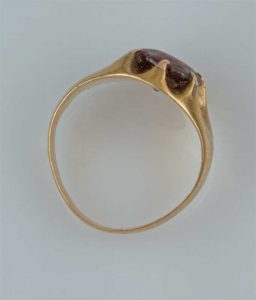 client a new garnet, but this would cost roughly the same as the polished crown and negate the sentimental value.

You May Also Like  Oh Canada: News and views from the Canadian summer shows

It would be easy to recreate the simple style of the gold ring and cast a new one, but we would have to add at least three times the weight of gold in order to have enough to make a ring of any substance, defeating the purpose of our efforts.

Since the new ring is to be worn on the client’s little finger, it would need to be increased by approximately four sizes. The original ring is far too worn and thin to be wearable, so we will make a new gold liner that’s 1.5 mm (0.06 in.) thick, and contoured to follow the shape of the underside of the crown. We will increase the width of the sides and bottom of the shank, and size it to his finger. Then we will size up the original ring and slip it over the liner, and soldered the two together. This will keep the original ring visible and the liner will provide the necessary stability to allow for the next generation of wear.

If the ring had been more substantial near the top—rings typically show more wear on the bottom of the shank—we could have simply done a 3/4 shank on the ring, but there was just not enough bulk for this to be possible.

Once the liner and ring are assembled, we will rebuild the claws and set the newly polished garnet. The client’s ring will now retains the ‘spirit’ and substance of his ancestor, and can be worn with pride for many years
to come.

You May Also Like  Three-minute burglaries: How jewellers can mitigate a new crime concern