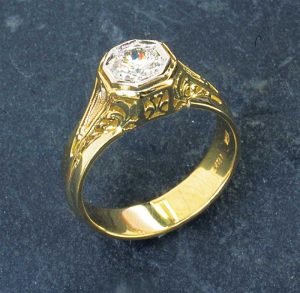 A related project involved a more intricate art deco-style platinum and diamond ring. When rings like these were made originally, they were all done by hand. Two thin sheets of metal were cut and pierced to become the main part of the ring, soldered together at the sides and bottom, and the top section was bent out to form the space required to hold the centre stone. Triangular sections were crafted and inserted to fill each shoulder, and finally, the hexagonal plate was attached to the top. This method was used rather than casting because it would have been difficult to achieve the delicacy of the hand-pierced detail with the available technology and platinum was rare and expensive.

A ring came in for restoration after years of wear. This ring retained its original centre diamond, which required a new top plate, re-setting, and millegrain frame. The shoulder diamonds and bezel-set side diamonds were still secure with a little refreshing, but the shank was badly worn down. I was able to apply a heavy 3/4 shank and touch up the piercing where the new shank was joined. The final stage was to hand-engrave the sides of the shank, replicating the motif that was barely visible on part of the original band.

I had a client come in and ask us to restore her grandmother’s vintage diamond solitaire, so she could wear it as her engagement ring. She also wished to have a wide wedding band that would look good with the solitaire and also be attractive worn alone. The diamond ring’s shank was typically worn to a sliver. We could have done a full shank, but then the wedding band would have to have been fitted to its irregular contour. To kill two birds with one stone, we made a pipe-style liner band the width of the widest point of the solitaire, which was sized and slipped over the liner, and soldered in place. This provided reinforcement for the solitaire plus a straight edge to fit against the wide yellow gold band. To further complement the antique ring, we added a central overlay of platinum, the hand-engraved motif inspired by the scroll design on the side of the diamond ring.

You May Also Like  Is it time to add non-precious materials to your product mix?

Another client brought in a similar ring from 1920-30, that had originally been cast rather than hand-fabricated. This ring was salvaged from a scrap pile intended to be sent for refining. The top and shoulders were in reasonable condition, though the shank was severely worn. The shoulders had a floral motif—probably orange blossom, a popular wedding flower of the era—flanked by wedding bells.

As before, we did a 3/4 shank, beefed up the thickness and width as much as possible, and had our hand-engraver restore the detail around the shank.

We then made a rubber mould of the ring, and over the years have since sold several variations using this as a base. As you can see from the two images, it was possible to modify the top of the ring to hold a range of gem shapes and sizes. In one case, we inserted a round plate and bezel set a brilliant-cut diamond, complete with millegrain, and in the second case, the ring was modified to accept an octagon emerald showing the versatility of this vintage style.